Home / Blog / What Part of Us Must “Die”?
Return to Previous Page

“What the hell do you mean by the 11 o’clock flight? I want the next flight out of here!!” This was the reaction of the man behind me in line after he was told the 4 o’clock flight from Barbados to Trinidad was canceled. Prior to his reaction, I had calmly agreed to be put on the 11 pm flight and given the “bribe-like” dinner voucher. This man instantly got on a 6 o’clock flight. I stood there in shock with my mouth open….WIDE. Should I have acted like imaginary Tony who is courageous in the mirror? Something was wrong here. In fact, something was wrong every time I didn’t speak up when I should have. This cost me both time and money on many occasions. I was slowly realizing that this was a habit that needed to change. In fact, there were many aspects of me that needed to change. Don’t get me wrong, I had come a long way from how I used to be but there was a version of me that needed to die…..and die completely!!!!

Have you ever felt like there were aspects of you that needed to be wiped out? 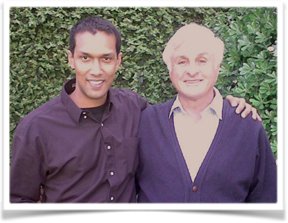 One of my most memorable catalysts for change came in 2010, while in Uruguay on a training program. I met a man by the name of Roberto Canessa. He was an invited guest to a Management class I was participating in and we had the opportunity to talk to him for about an hour and a half about his experience as one of the 16 survivors of the Andes flight disaster in 1972. Canessa was part of a rugby team on their way to neighboring Chili from Uruguay for a game when their plane, carrying 45 passengers hit a mountain peak and crashed. Many of his friends died that day including teammates, family and friends and more died during their two-and-a-half-month ordeal in the freezing conditions on that mountain.

For those who could remember, the movie (“ALIVE”) was made in 1993 depicting their experience. Canessa shared his story openly, which included having little food, no source of heat and interpersonal conflict. Many difficult decisions followed during this harrowing experience. The decision that stood out was deciding how were they going to stay alive and that included eating the dead bodies of their friends lying in the snow outside the fuselage. Through courage, determination, and persistence, however, they were eventually rescued because of the added efforts of Canessa and Nando Parrado who walked through the Andes for 10 days to get help.

Whether it was an event or someone you met, have you ever had one of those powerful moments where you felt like the “sky” opened up? This is how I felt at the time. At that moment, the fact that I still settled for things, all of a sudden, felt like it could have a devastating effect on my future. Of course, change sometimes takes time but the goal right now was to take more action than I had taken before. Even though I felt that I achieved a lot up to this point, I felt like progress was lacking in certain areas of my life and this alone, can demotivate many.

As difficult as it may seem, we must seek to eliminate every aspect of ourselves that does not support our aspirations.

Whether it is our lack of assertiveness, our inability to act because of what others may say, or the delay in making a jump because you don’t fully believe in the end result, please know that things may have to be different from how they have been. Maya Angelou once said; “when you know better you do better.” Also, please keep in mind that eliminating aspects of yourself sometimes means limiting time with those people who don’t add meaning to your life.

I wanted to instantly change. Over time, being inconvenienced stopped bothering me and it felt like tremendous progress and progress is a powerful motivator. Here is what it meant for me and many others I have come across in my years as a Learning and Development Professional:

1. A higher level of assertiveness
How do we achieve this? Be willing to speak up!!! State the problem, express how you feel, make a request, and a statement that would reinforce it. Remember to aim for a win-win situation. It is not always possible but aim for it.

The minute someone realizes that you’re a “yes” person, they may come to you for everything. Whether it is conscious or unconscious, you will be taken advantage of. If you plan to do everything that colleagues ask you to do or to think that an “URGENT” request always means “right now,” prepare to suffer!! Simply ask: “Is it possible to give me a deadline?” because, with a deadline, you can plan your work more effectively.

2. Less fear of judgment
Yes, yes, it still bothers me a little, but again,  I have come a long way. If it serves to improve you or your task…Great!!!…. If it is just criticism ..Ignore!!! Haters will hate and doubters will doubt. Detach from trying to please everyone.

3. A greater degree of optimism
You have nothing to lose by staying positive but a lot to lose by being negative. When I say positive, what I mean is realistic optimism. There is a danger in constantly forcing yourself to be positive when you have to be objective about situations. Optimists tend to have more disappointments than pessimists simply because they take more risks. Remember that negativity not only destroys your motivation to act but also appears in your body language when you show up, affecting your ability to influence those around you. Just as importantly, it will deflect the people who were once willing to guide you along the way. Haven’t you ever heard of people saying, “that person drains me?”

Keep in mind that if you start doing something differently, these actions will eventually become a part of you if they are done persistently. You will eventually start “being” that and on the way to a more progressive, courageous, and “exponential” you.

The 4 factors we cannot ignore when we go after our goals
Next
Is the Horse Thirsty? 5 Ways to Influence Others Through Emotion